Widely dismissed by many as a failure, the December climate-change conference made it clear that the private sector needs to take a more active role in finding solutions to global warming if disaster is to be averted.  This realization could lead to more cooperation between the private and public sectors, and more robust ecosystem markets around the world. 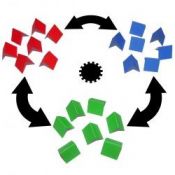 Widely dismissed by many as a failure, the December climate-change conference made it clear that the private sector needs to take a more active role in finding solutions to global warming if disaster is to be averted.   This realization could lead to more cooperation between the private and public sectors, and more robust ecosystem markets around the world.

16 February 2009 | Much attention has been directed at the extent to which nations are willing to commit to voluntary targets and timetables for reducing greenhouse gases since December’s United Nations Climate Change Summit in Copenhagen.

But while governments score points at home and abroad with goals that mean little without a strong international agreement, the real story is the wave of interest that COP15 has generated among businesses for developing the tools, market-based initiatives, and public-private collaborations that are already reducing climate change’s impact. Whether it’s green cities, clean vehicle partnerships or trading schemes that monetize the cost of carbon, COP15 has made it clear that the private sector is not waiting for a government consensus to develop.

“If practical solutions to the problem of climate change are going to be found, financed, and implemented, it is global firms that will get it done,” says Anant K. Sundaram, visiting Professor of Business Administration at Dartmouth’s Tuck School of Business. He says that while the international public policy apparatus – including the UN – is needed to enable and oversee this, “it needs to get out of the way” so that companies can deliver technology solutions in energy efficiency, energy alternatives and capturing and storing carbon on a scale that is meaningful.

Nowhere was positive momentum for engaging private sector expertise and financial support more on display than in efforts to promote REDD, or Reducing Emissions from Deforestation and Forest Degradation in Developing Countries. REDD, which helps support forest conservation by creating a mechanism whereby carbon emitting businesses in one country can buy offsets in the form of pollution allowances that essentially pay for the upkeep and preservation of rainforests in poorer countries.

“A clear idea of what is required to make REDD-plus work has now emerged, with real potential to contribute up to 30% of the global effort to stabilize atmospheric greenhouse gas concentrations over the next decade,” he says.

While no legally binding REDD-plus mechanism was adopted at the conference due to the larger failure to reach binding agreements on how much money rich nations would contribute, enough progress was made to allow the private sector to begin implementing sub national demonstration activities and even scaling them up to the national level. The talks even produced $3.5 billion of short-term financial commitments to fund the effort from Norway, Japan, the United States, Britain, France and Australia.

Progress on REDD was due in large part to a very effective alliance of private sector, NGOs, scientists and governments, and this did not go unnoticed by other constituencies at the conference. Professor Diana Liverman, Visiting Professor of Environmental Policy and Development at Oxford University and former Director of the Environmental Change Institute, says that after seeing the success of the forest lobby, “the really powerful agricultural interests and countries came together I think for the first time to think very seriously about the role of agriculture and food systems both in adaptation and mitigation.”

There was no shortage of business leaders agitating for business to do its part, whether a political agreement was reached or not. Sir Richard Branson, chief executive of Virgin Group, set the bar high, stating: “If governments do not come to a resolution then I think it’s up to businesses to actually force through resolutions to this issue.” He called on industries such as shipping and aviation to set targets for themselves in reducing the amount of carbon they release into the atmosphere, and then find imaginative ways to achieve those targets, much as cities need to find imaginative ways to engage the private sector to achieve their targets.

The same panel also highlighted the need for private funding for   municipal-level climate change mitigation projects, and found strong support from a group of leading mayors from around the world, who called for the greater use of public private partnerships at the municipal level to fund sustainability projects.

Ecosystem Markets: a Subset of PPP

Los Angeles Mayor Antonio Villaraigosa outlined several groundbreaking partnership initiatives, including the world’s largest LED street-lighting program to improve energy efficiency as well as a Clean Truck Program at the LA seaport, where efforts to replace around 5100 old diesel trucks have already reduced truck emissions by 70%.   California governor Arnold Schwarzenegger, who has become one of America’s leading advocates of public private partnerships in infrastructure after close encounters with a spiraling state budget, was similarly keen at the conference to promote municipally based private sector projects, as well as grassroots level efforts to combat climate change.

He has good reason. Private financing and delivery of public assets and infrastructure improvements at the municipal, state and national levels through PPP has become a global phenomenon over the past five years as national governments in developed and developing countries both look for new ways to get the modern economic and social infrastructure without breaking the budget. The model makes use of private investments for construction and maintenance of the assets, typically in return for a steady long-term flow of interest payments linked to tolls or to future government tax revenue.

Moreover, while the PPP model has been used until recently primarily for highway transportation projects, and to procure public schools, healthcare, prison and government facilities, there are an increasing number of projects in the pipeline to deliver clean water, clean energy, zero emissions transportation, sewage and waste recycling services.

Numerous governments have also been introducing sustainable development into their criteria for selecting PPP projects that they put out for competitive tender. The Netherlands, which has one of the most active PPP programs on the European continent, actively biases the award of projects towards those consortia that give attention to environmental considerations in their bid proposals. In France, PPP projects that are aligned with the goals of the “grenelle de l’environnement”, or ecological forum, such as heavy rail infrastructure projects, are currently given priority consideration   for a special state signature guarantee that could cover 80% of the financing of the borrower’s loans during construction and operation.

In the U.S., President Barack Obama last month followed up his endorsement of COP15’s goals with the announcement of $8 billion of Federal Railroad Administration grants from the America Recovery and Reinvestment Act (ARRA) to act as seed money to create a nationwide high-speed rail network. In California, which alone will receive $2.25 billion of the grant, Governor Schwarzenegger has pledged to match the federal grant dollar for dollar, with $10 billion of bonds already approved for the rail line and a PPP envisioned as part of the project delivery mechanism.

How Far is Too Far?

Not everyone at COP15, or indeed in environment ministries around the world, is convinced that a prominent role for private sector participation in delivering climate change solutions is desirable. This is especially true with regard to sensitive assets such as water, which some consider too essential a resource for life to be entrusted to private suppliers. Many environmentalists also continue to oppose nuclear energy, notwithstanding its zero-carbon footprint, on grounds that it’s expensive to produce, generates toxic waste and carries other environmental risks. Still others are opposed to entrusting such facilities to large corporations on grounds that many of these companies have dubious environmental records.

Such views found ample expression not only in the violent clashes that took place outside the conference, but in the views of eco-avengers such as author Naomi Klein,   who decried the lack of attention at the conference to “the role that corporations are playing in creating this crisis”, as well as the continuing influence of the fossil fuel lobby on shaping climate policy.

Geoffrey Hamilton, Chief, Cooperation and Partnerships Section for the United Nations Economic Commission for Europe, says it would be wrong to underestimate the strength of opposition to private involvement in designing and delivering climate change solutions.

“Many environmental people reflect views within governments, where they are suspicious of the private sector and view it not so much as part of the solution, but as part of the problem.”

The Bridges of COP 15

From his perspective, “One of the benchmarks in terms of determining the success of COP15 is the extent to which bridges are being built between the environmental ministries and the public infrastructure development ministries, because that’s been a difficulty in the past.”

It’s hard to predict whether COP15 will lead to the binding agreements that the private sector and the public-at-large see as needed to enable the scale of investment that the private sector is capable of delivering this year. But if it does, it is likely that the deal comes as much out of an awareness of the green jobs bonanza that will result as by the need to invest in saving the planet.

When a group of 191 institutional investors managing more than $13 trillion met at the UN in January, the statement that came out of the meeting was as unambiguous on this point as it was about their commitment to taking action. But noting how Germany’s “comprehensive policies “ on developing a low-carbon economy have already helped to create eight times more renewable energy jobs per capita than the U.S., the statement concluded:

“For us to deploy capital at the scale needed to truly catalyze a low-carbon economy, however, policymakers must act swiftly.”

Henry Teitelbaum is a London-based international financial journalist and author, most recently of The PFI Market Intelligence Report, PPP: Challenge and Opportunity After the Financial Crisis, which was published by Reuters in September 2009. He is reachable at [email protected]