The 13th Conference of the Parties to the United Nations Framework Convention on Climate Change (COP 13) is more than a month behind us, but plenty of debate lies ahead as advocates and opponents of using forestry to combat climate change air their opinions in the lead up to COP 14 later this year in Poland and COP 15 next year in Denmark. Jeff Horowitz and Robert O’Sullivan of Avoided Deforestation Partners take stock of the Bali Roadmap and what it means for avoided deforestation. 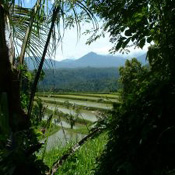 The 13th Conference of the Parties to the United Nations Framework Convention on Climate Change (COP 13) is more than a month behind us, but plenty of debate lies ahead as advocates and opponents of using forestry to combat climate change air their opinions in the lead up to COP 14 later this year in Poland and COP 15 next year in Denmark. Jeff Horowitz and Robert O’Sullivan of Avoided Deforestation Partners take stock of the Bali Roadmap and what it means for avoided deforestation.

25 January 2008 | In December, more than 10,000 politicians, scientists, NGO representatives, and academics inundated Bali, Indonesia, for two full weeks. The goal was to negotiate, lobby, and struggle through the increasingly complex web of international climate change policies. At the end of it all, an agreement was reached as part of the “Bali Action Plan” to spend two more years negotiating a future agreement that should include reducing deforestation in developing countries – something that currently accounts for a whopping 15 to 25 percent of global greenhouse gas emissions.

Critics have dismissed this round as being too technical and too soft on action, but a closer look at the Bali decisions shows that the event yielded significant decisions that will impact future US engagement in international climate policy and the future of millions of hectares of tropical forests. Surprisingly, this in turn becomes significant for US companies.

The US did not ratify the last treaty to address climate change – the 1997 Kyoto Protocol. The Clinton administration agreed to the text of the agreement in 1997, but the Bush administration pulled out before it became binding in the US, arguing that developing countries were not required to do enough to reduce their own emissions under the agreement, which meant this would hurt the US economy.

Despite the bashing it receives in some quarters in the US, the Kyoto Protocol was ratified by over 175 countries and is regarded as one of the most revolutionary and successful pieces of international environmental law ever passed. The treaty has created a multi-billion dollar market for trading emission-reduction credits and helped trigger billions of dollars of underlying investment into renewable energy and other projects in developing countries that reduce greenhouse gas emissions.

The Costs of Deforestation

The Kyoto Protocol did not, however, address the critically important issue of deforestation in developing countries, which contributes more carbon emissions than the entire world’s transportation sector. If these emissions are not reduced, then all the efforts of all those well-meaning people buying renewable power, driving a Prius, or turning down the thermostat this winter will come to naught.

And stopping deforestation is about more than just climate change. It’s about saving the homes and livelihood of indigenous people and preserving fragile swathes of biodiversity that have taken centuries to evolve. These are being permanently decimated at a rate that, if unabated, will wipe out Indonesia’s entire orangutan population in 20 years.

But the real damage is less visible. Loss of plant biodiversity, for example, disrupts the chemical composition of the atmosphere and, with it, weather patterns. There is some evidence linking reduced biodiversity and the resultant shifts in weather patterns to drought in Latin America, and we have all heard of the lost opportunities to find new medicines as valuable species perish.

The agreement on deforestation incorporated into the Bali Action Plan is remarkable as it offers hope that something will be done to stop this destruction. Equally important, the Bali outcomes contain a possible way forward to addressing concerns the US had with the Kyoto agreement.

First, a number of developing countries have stated in the Bali decisions that they may be willing to take action to reduce deforestation. Second, reducing emissions from deforestation is the most cost-effective way to reduce emissions globally. New technologies are not needed and deforestation can be reduced now.

One of the favored sources of finding the $10 billion or more per year it is estimated is required to significantly reduce deforestation is to expand the booming emissions trading market created by the Kyoto Protocol. If this increased supply is met by increased demand this expansion is good. Including deforestation in the emissions-trading market will reduce the overall costs of cutting emissions globally, making it a win-win situation for the economy and the world’s forests.

Many US companies are already faced with state-based legislation to reduce their emissions, with expectations that more federal legislation will follow. Most reductions need to happen domestically, and many cost-effective options are available. However, if US companies are able to partially use the international carbon market, they will be able to meet overall reduction targets more cost-effectively. This will help reduce the overall costs to the US economy that many fear – correctly or not – may be incurred if the US embraces emission caps.

The Bali Action Plan is significant as it opens the window to engage the US and US companies to become part of the global response to avert a climate catastrophe and save the world’s rainforests before they disappear forever.

Jeff Horowitz and Robert O’Sullivan are founding partners of Avoided Deforestation Partners (www.adpartners.org) an independent network and think tank on deforestation policy. Robert is also the Executive Director, North America for the consulting firm Climate Focus. AD Partners were intimately involved in the recent international treaty policy negotiations in Bali regarding the inclusion of provisions to use carbon trading to save tropical forests.