As the Gulf Coast States’ vulnerability to hurricanes and other powerful storms continues to increase, a new methodology, developed by New Orleans based Tierra Resources and approved by the ACR, for the restoration of the Mississippi River deltaic wetlands with a focus on mitigating hurricane harm, might prove to be the solution. 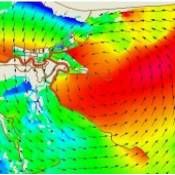 As the Gulf Coast States’ vulnerability to hurricanes and other powerful storms continues to increase, a new methodology, developed by New Orleans based Tierra Resources and approved by the ACR, for the restoration of the Mississippi River deltaic wetlands with a focus on mitigating hurricane harm, might prove to be the solution.

20 September 2012 | David Diaz and Sarah Mack were working in Mack’s New Orleans office when Diaz noticed a faded yellow newspaper clipping that told of a young scientist who’d come down from Maine in the 1940s to model the Mississippi Flood of 1927.

He was looking for ways to prevent that kind of damage from ever happening again, and he was Mack’s grandfather – a man she never met, and whose research she only learned about after finishing grad school and beginning her own work on wetland conservation in Louisiana.

“Down in Louisiana and on the Gulf Coast in general, where we’re hit by repeated hurricanes, our only future is to try and deal with our wetland loss,” she says. “But wetland restoration is not limited by any kind of technical expertise; it’s limited by funding.”

Deltaic wetland restoration has been priced at over $50 billion by Louisiana’s Comprehensive Master Plan for a Sustainable Coast. That funding will, Mack hopes, come in part through the sale of carbon offsets – thanks to the new methodology that she developed with support from Entergy Corporation. Landowners who restore wetlands will receive carbon credits for the amount of carbon and other greenhouse gases that these restored ecosystems store. Landowners can then sell the credits to businesses looking to offset their emissions. The methodology has been approved by the American Carbon Registry. (ACR)

To a region so highly dependent on these coastal ecosystems and where some of the fastest rates of wetland loss in the world are taking place, Mack estimates, based on research, the carbon finance will bring in between 5 and $15 billion toward wetland restoration over a 40 year period.

Diaz, who formerly ran Ecosystem Marketplace’s forest program, is now a senior portfolio associate at of Climate Trust, a nonprofit offering climate solutions. He played an advisory role in designing a model for the first pilot project using the wetlands restoration methodology.

“The methodology is designed in a modular manner similar to REDD,” says Diaz. “You can do a lot of different things with a methodology set up this way.”

Because of the modules, Diaz says they were able to pick and choose what elements to expand on. And so for the pilot project, they were able to use a preventative weather model that accounted for projected weather over the project’s time period.

The pilot project is taking place in St. Charles Parish, a rural area outside of New Orleans. The project has actually been in place since 2009 although monitoring and quantifying carbon according to the methodology will begin in October. St. Charles was chosen because they had needed to update their wastewater infrastructure but lacked financing. The parish implemented the new infrastructure based on the understanding they would pursue other forms of funding to compensate the landowner which included carbon credits. They’re hoping to use finance generated from this project to pay Rathborne Land Company by next year. Otherwise, the parish will have to pay for the infrastructure upgrade.

In the past, wetland restoration has been done through the government which often is cumbersome taking several years to implement. But with private finance, Mack says projects can get started quicker and inhabitants will gain benefits faster. For example, planting mangroves, which are known to be hurricane resistant, will result in a storm surge reduction within two to three years of planting.

Cypress trees as well will be used in the pilot project. They are resistant to wind-throw or hurricane winds and will be planted in freshwater systems to mitigate storm damage.

On top of protection from hurricanes and other storms, the wetlands provide plenty of other ecosystem services to the region and the world such as fisheries and wildlife. Mack uses the example of migrating birds dying from exhaustion as a result of a shrinking coast.

But there is also a cultural tie for the inhabitants of the Mississippi River Delta. The region is known for its fresh seafood and popular recreational activities as well as deeply regional hobbies like ‘frogging.’ These are all intricate parts of the culture and they all rely on healthy wetlands. The shipping industry and fisheries also help support the local economy.

“Especially in the rural areas, everything is focused on the wetlands,” Mack says.

And Restoring America’s Estuaries estimated wetland restoration could create twice as many jobs as the oil and gas and road construction industries combined.

Mack is hoping to expand on the methodology that was developed specifically for the Mississippi River delta wetlands to other places such as California, South Carolina, Florida and Maryland.

Kelli Barrett is an editorial assistant for Ecosystem Marketplace. She can be reached at kbarrett@ecosystemmarketplace.com

Writing The Rule That Will Rebuild The Bayou-With Carbon
Mississippi Learning: Flood The Plains-And Spare The Disaster?
Image source: Wunderground
A hindcast image of St. Bernard almost completely underwater as Katrina passes to the east