The first major climate talks of the year have kicked off in Bonn, Germany, and will run two weeks – culminating with the Carbon Expo in neighboring Cologne, where we will unveil the annual State of the Voluntary Carbon Markets Report.  Here’s a quick overview of land-use issues under discussion. 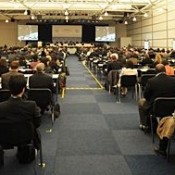 The first major climate talks of the year have kicked off in Bonn, Germany, and will run two weeks – culminating with the Carbon Expo in neighboring Cologne, where we will unveil the annual State of the Voluntary Carbon Markets Report.   Here’s a quick overview of land-use issues under discussion.

BONN | Germany | 14 May 2011 | Negotiators meeting in the former German captial aim to move forward on the Durban Platform, which aims to phase out the Kyoto Protocol by 2017 and replace it with a truly global agreement that will be negotiated by 2015.

On a macro level, the all-to-familiar theme of rich vs poor will playing out again as developing countries lobby the European Union to adopt steeper reductions of 30% below 1990 levels by 2020, even though major emitting nations like China, Japan, Russia, Canada and the United States are but are willing to sign onto a replacement agreement that includes developing countries.

We’ll be limiting our coverage to those issues impacting land-use and forestry.

On the forest carbon front, the Subsidiary Body for Scientific and Technological Advice (SBSTA) will begin implementing a workplan agreed to in April designed to finally yield scientific guidance on forest monitoring systems and reference levels – two key components of REDD+.

SBSTA will also be examining mechanisms designed to promote low-carbon agriculture – and will, for the first time, break “climate-safe” agriculture out into a stand-alone item.

Another subject on the agenda is the growing trend among individual nations to incorporate mechanisms from voluntary markets in their compliance programs and how to integrate these into the UNFCCC process.

Finally, talks are continuing to shift towards the development of National Adaptation Plans (NAP), designed to help developing countries deal with the effects of climate change.