The United Nations aims to halt biodiversity loss by 2020, in part by promoting financing schemes that recognize the economic value of our planet’s living ecosystems.  One such scheme is the “Green Development Mechanism”, which is designed to both promote economic development and preserve biodiversity.  Its backers will be presenting their ideas on Friday and Monday in Nagoya. 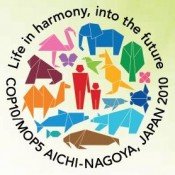 The United Nations aims to halt biodiversity loss by 2020, in part by promoting financing schemes that recognize the economic value of our planet’s living ecosystems.   One such scheme is the “Green Development Mechanism”, which is designed to both promote economic development and preserve biodiversity.   Its backers will be presenting their ideas on Friday and Monday in Nagoya.

21 October 2010 | Since the Rio Earth Summit in 1992, funding for the Convention on Biological Diversity (CBD) has fallen far behind that of the Framework Convention on Climate Change.   While climate change remediation received US$144 billion last year, official bilateral funding for CBD related objectives averages around US$2.5 billion annually. The total for biodiversity rises to around US$4 billion when the Global Environmental Facility, World Bank, and voluntary payments for environmental services are added – roughly 3% of the funding for climate change.

Given estimated financing needs for biodiversity at between US$50-$300 billion per year, the Parties to the CBD are planning to take action on this issue at this week’s COP in Nagoya, Japan.   However, in the current economic climate it may be wishful thinking to expect the COP to achieve a significant increase in bi-lateral or multi-lateral funding.   But the chronic shortfalls underscore the need for a new initiative capable of delivering resources on the scale of the climate change convention.

A solution may be provided when the COP deliberates on Innovative Financial Mechanisms.   One of the most promising ideas is a Green Development Mechanism (GDM), an idea which has emerged from a series of consultative meetings leading up to this year’s Conference of the Parties.   While opinions still vary on the GDM, recognition of the importance of engaging the private sector – a key feature of the GDM – is widespread within the COP.

Supplementing Government Financing – Not Replacing it

The GDM is intended to supplement government assistance – not to substitute for it.

Like the CDM, it is specifically designed to tap the resources of private sector companies and individuals who wish to begin the process of compensating for their ecological footprint. The CBD can – and should – have two mechanisms of funding: one for capturing government resources, and the other for private-sector participant.

Proposals for a GDM are an attempt to tap private sector financial resources, inspired in part by the success of the Clean Development Mechanism (CDM) under the Kyoto Protocol.   Since its inception in 2002, the CDM has generated US$23 billion in carbon offset payments, and catalyzed well over US$100 billion in private sector investment in low carbon projects.   In contrast, the CBD has done very little until now to attract the private sector, and has instead relied on bi-lateral and multi-lateral aid contributions.   Much of the funding gap between the two Conventions is due to this structural difference.

As currently proposed, the GDM would be a standard setting and certification body for land use projects that conform to the three basic objectives of the CBD: conservation, sustainable use, and equitable sharing of the benefits of biodiversity.   For projects in developing countries, a contribution to poverty alleviation and development would also be expected.   Under the GDM, a land (or aquatic) management plan would be produced by the project proponents, and approved based on COP guidance, verified by independent auditors, then offered as a biodiversity investment to the private sector.   The management plan would define the GDM-certified area, denominated in spatial units, such as hectares, with a minimum time commitment of 10 years.

The Implementation Challenge
Operation of the GDM could be vested in an administrative structure set up by the Conference of the Parties to the CBD.   Its functions would include approval of GDM management plans based on certification by independent auditors, maintenance of a registry of projects and transactions, arbitration of disputes, creation of a clearing house of information for market participants, publicity and outreach to potential investors and project developers, oversight and reporting to the COP on implementation of project methodologies and requirements, administration and finance.

Transactions with investors would take place through the GDM administrative structure.   As an example, a project proponent could offer a commitment to manage a 1000 hectare area to GDM standards for ten years for US$1 million dollars.   The pricing on the commitment would be subject to negotiation, and would reflect the underlying biodiversity values of the area as well as the level of investor interest.   Beneficiaries could be in the public, private, community, or NGO sector, could involve a wide range of land uses from farming and forestry to strict protection, and could be located in any country.

Investor participation would be voluntary.   There are many reasons why an investor would be interested in securing a commitment for GDM-certified managed areas.   Many companies have investor requirements for no negative impact on nature, or supply chain sustainability goals, or are interested in strengthening their corporate social responsibility.   Philanthropic organizations would find that the GDM provides a direct way to reach small scale land managers.   Individuals conscious of their biodiversity footprint could voluntarily choose to compensate.   The GDM offers investors the satisfaction of contributing to the protection of biological diversity in a specific ecosystem, through a United Nations guided and managed process.

Indicators of the potential for new funding under a GDM include the emerging market for voluntary payments for environmental services, contributions to conservation organizations, and investments by philanthropic institutions in nature, among others.   The recent TEEB for Business report identifies $65 billion in expenditure in markets related to biodiversity, including certified agricultural and forest products, private land trusts, payments for watersheds and other environmental services, and offsets for biodiversity loss.   This indicates that over the long term, funding under the GDM could come to rival the billions generated by the CDM.

Land managers, especially in developing countries, currently have virtually no links to such markets.   Yet many already exercise considerable environmental stewardship regardless of the lack of financial incentives for doing so.   For example, a company in the Brazilian Amazon, Restoration Forestry, practices an ecological form of reforestation.   It rehabilitates degraded pastures by alternating rows of native tree species with natural vegetation.   As a result, a permanent forest canopy forms over time with the biodiversity approximating a natural forest.   Programmed harvests are light, reflecting the maturities of the diverse tree species, and none of natural vegetation is harvested.

Such a project could offer a GDM-certified contract priced to cover the additional costs of ecological reforestation.   This would create an incentive to expand ecological practices by equating the financial viability of the project with conventional practices.   As in the CDM, payments from the mechanism would catalyze increased local investment in sustainable practices.   Both the value of the international payment and the local project developers’ investment would contribute to the flow of funds for environmental remediation.

Until this becomes a reality, however, land managers in developing countries will continue with few links to such investors.   Instead, the highly sophisticated projects will try to attach their biodiversity benefits to carbon sequestration projects under the CDM.   Others will seek investors through the nascent market in international payments for environmental services.

Instead of remedying the lack of a private sector mechanism, some Parties to the CBD will continue to argue for increases in official bi-lateral assistance.   Others will focus on creating detailed blueprints for incentive programs, or on further refining estimates of the value of global biodiversity.   Meanwhile, a market in global biodiversity is waiting to be tapped.

When the GDM comes up for discussion at the COP, opposition and indifference can be expected.   Some will worry that a GDM would by-pass established institutions, such as central governments and international conservation organizations, by linking project developers directly with investors worldwide.   Ironically, it is these same institutions who will decide whether to build bridges with the private sector, or continue to rely on governmental aid and NGO philanthropy.

If the inertia can be overcome, agreement to proceed with a GDM would make the CBD relevant in local land use decisions, something the climate change convention has achieved for polluters.   Currently, land managers in developing countries have little knowledge of the CBD, much less feel directly influenced by any of its decisions.   A GDM could change this immediately by creating financial incentives for those who comply with CBD objectives.

Alexander James is manager of Restoration Forestry, in Marituba, Parí¡, Brasil.   He was a consulting economist at the Secretariat of the Convention on Biological Diversity when incentive measures and other financial issues first entered the agenda of the Conference of the Parties in 1996.
Francis Vorhies is Executive Director of Earthmind, a non-profit sustainability consultancy in Geneva, Switzerland, and is heading up the GDM 2010 Initiative with support from the Government of the Netherlands.   He was formerly chief economist for the IUCN-International Union for the Conservation of Nature.