Marina Silva won’t be on the ballot when Brazil chooses its new president this weekend, but the 20 million people who voted for her are still out there, and the two remaining pro-industry candidates are scrambling to show their green cred.  Regardless of what happens on Sunday, this new Green constituency has changed the face of Brazilian politics forever. 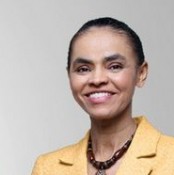 Marina Silva won’t be on the ballot when Brazil chooses its new president this weekend, but the 20 million people who voted for this rubber-tapper-turned-green-politician are still out there, and the two remaining pro-industry candidates are scrambling to show their green cred.   Regardless of what happens on Sunday, this new Green constituency has changed the face of Brazilian politics forever.

28 October 2010 | Earlier this month, on October 3rd, the first round of Brazil’s Presidential elections brought the environmental agenda into mainstream politics for good – thanks to a stunning first-round showing by former Environment Minister Marina Silva.

She garnered more than 20 million votes, which left both Dilma Rousseff, the candidate picked by President Luiz Iní¡cio Lula da Silva’s ruling Workers Party (PT), and centrist José Serra, of the the Brazilian Social Democracy Party (PSDB), without the majority needed to win.

That forced Sunday’s runoff, and even now it’s difficult to tell who will end up leading this 200-million-strong growing giant, the largest democracy in Latin America and the world’s eighth-largest economy, which quickly recovered from the global recession with a projected GDP rate of 7% for 2010.

A former rubber tapper from the Amazon rainforest, Silva served as Environment Minister from 2003 to 2008.   She ran for president this year on the Green Party ticket, and her campaign amassed an historic 20 million votes, positioning the environment in the spotlight of Brazilian politics.

Dilma and Serra are now scrambling to convince Silva’s constituents that they are green, but the prospects for environmental conservation in Brazil under either one of them is gray.

Both Dilma and Serra are considered “old school”, with development agendas that relegate pressing environmental issues to the sidelines. In 2008, da Silva quit as Lula’s Minister of Environment to protest his government’s failure to defend the Amazon rainforest.

Specifically, her Plan for a Sustainable Amazon (PAS) collided with Rousseff’s Accelerated Growth Program (PAC). Rousseff was Lula’s Chief of Staff at the time, and today her PAC has budgeted $564 billion dollars for public investment in infrastructure and energy projects.

Serra, on the other hand,   is a pro-privatization liberal with strong ties to the major agribusiness interests that are expanding the agricultural frontier further into the ‘arc of deforestation’ along the southern and eastern extent of the Brazilian Amazon.   This area is responsible for roughly 80% of both cumulative clearing and current deforestation in the region.

Brazil holds about 20% of the world’s biodiversity, is home to the world’s largest reserves of renewable fresh water and 60% of the largest tropical rainforest, the Amazon, which contains the equivalent of 42 billion tons of carbon. In purely economic terms, it ranks as the 8th global power, but it is surely the first in environmental wealth. Yet neither presidential candidate includes the environment as a priority for conservation, and neither sees it as a key driver of a new world order.

Despite this lack of interest, the new president will have to deal with two landmark environmental issues at the beginning of his or her government: the Forestry Code and Belo Monte.

The Rural Caucus, comprised of lawmakers representing the interests of large landowners and agribusiness, is fiercely maneuvering in Congress to undermine Brazil’s progressive Forestry Code, significantly scaling down the 80% current requirement for legal reserves in the Amazon among other measures.

Meanwhile, the federal government is pushing to build Belo Monte, the world’s third-largest hydroelectric project, on one of the Amazon’s major tributaries, the Xingu, affecting thousands of indigenous peoples and flooding the rainforest. Belo Monte is the most controversial dam project in Brazil. As part of 60 large dams envisioned in the PAC for the next 20 years, it is feared that, if approved, it will open the way for the destruction of most of the rivers in the Amazon.

Marina Silva decided not to support either candidate in the runoff elections, leaving her electorate free to choose out of their own conscience on October 31st. How Dilma or Serra respond to 20 million voices – which are echoed by millions more who care for an environmentally sound world – remains to be seen and felt.

Will Brazil Change its Forest Code – and Kill the Amazon?