As their primary consumers and users, women are ultimately the target customers of almost all cookstoves and fuels distributors. Less common, but no less important, is women’s inclusion throughout the clean cooking product supply chain. Here is how some enterprising organizations are engaging women from the bottom up. 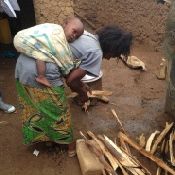 5 January 2015 |When EcoZoom began designing its first cookstove, it wanted to include women from the start. “It was common sense for us, explains Amanda West, the co-founder and Chief Communications Officer at EcoZoom. “The cornerstone of our business is our product, and if we don’t have a product women want to use, the whole business was going to crumble anyway.

To make a product that women will use, the company involved them throughout the design process. “It was over 230 participants in the whole design process, she says. “Then we came out with this awesome charcoal stove that women are in love with.

The design went on to win Gold in the International Design Excellence Awards earlier this year, and now EcoZoom wants to integrate gender inclusion throughout the rest of their supply chain. However, they’ve found that including women isn’t always as simple as stakeholder consultations.

That’s where the Global Alliance for Clean Cookstoves comes in. EcoZoom is one of 6 Spark grant recipients, and the Alliance is helping them develop data that more clearly identifies the users by gender. In addition to working with individual companies, the Alliance also works to collect sex-disaggregated data at the sector-wide scale beginning with the organization’s newly-released 2013 Results Report.

The report was informed by a survey that asked all respondents about their gender strategies, as well as for data that breaks down users by gender when available. While over three-quarters of partners reported having a gender-focused strategy, challenges remain to appropriately address gender issues in the clean cookstoves and fuels sector. Most organizations (35%) cited funding as a key barrier to further implementation. Other commonly-cited issues include internal capacity, capacity of partners, ability to scale, and the ultimate sustainability of such operations.

The Alliance hopes to address these challenges head-on, since increased knowledge from data and case studies could help cookstoves activities around the world become more effective.

As a case in point, another Spark grantee, Sustainable Green Fuel Enterprise (SGFE), could have benefitted from adapting EcoZoom’s design process. A 2014 recipient of the prestigious Ashden Awards in 2014, SGFE still scored low on gender in their SPARK Fund application. The primary reason cited? Because SGFE didn’t disaggregate their data by gender, and didn’t address gender concerns throughout the supply chain.

“Now we start to include them [women], explains Carlo Fig  Talamanca, SGFE’s CEO. “Not just because we want to do good, but because it will also help us do better business.”

Talamanca already knew that women were integral to his supply chain. They were the majority of owners in retail shops, and restaurants that made bulk orders from his company employed many women. He had also found that women SGFE hired were more reliable than their male counterparts, even if they weren’t able to provide heavy manual labor.

However, he didn’t have an established strategy for including women his actions were primarily reactive, not proactive. In particular, problems started when he hired a female accountant and an administrative manager earlier this year. Talamanca explains that while the men weren’t overt in their disrespect toward the new hires, their subtle actions that had a big impact sometimes they might ignore what she said or be mildly rude in a response to her.

“I got really upset, Talamanca said. “I said anyone who is really impolite not just to women or to management, but to each other in general then they get a monetary fine. This they understand, because we enforce it.

Talamanca welcomed support from Els Rijke, the gender expert sent by the Alliance as part of the Spark Fund. The expert walked through every aspect of SGFE’s supply chain and created a gender action plan based off of the Alliances best practices guidebook,Scaling Adoption of Clean Cooking Solutions through Women’s Empowerment.

“She doesn’t have a magic wand, he explained to me over the phone. Instead, the expert would ask questions about practices or actions that were taken for granted and try to figure out the cultural reasons behind them. In some cases, problems were only tangentially gender-related and more overtly poverty-related.

Many of Talamanca’s employees come from poor waste-picker communities. Though they receive higher wages from SGFE than from many others jobs available, the women usually more responsible employees by showing up on time and working harder sometimes skip days.

Upon further questioning through a series of interviews, they found that this is because the majority of workers are indebted. The women are more often the ones who take out loans and repay debts (though their husbands often spend the money). They would skip days to work another job or try to find cash to pay off their debts.

After these interviews, Talamanca and Rijke worked to create a matrix of possible solutions and ranked them by long-term effectiveness and risk reduced. As a next step, Talamanca will review these suggestions to decide the next course of action.

He plans to address the lending issue immediately. Starting in November, Talamanca will pay salaries through a micro-finance institution instead of in cash. The bank account has multiple benefits: it reduces risk of theft both at the factory and at the employees houses, as well as encouraging savings.

A third benefit, as yet untested, is the opportunity for low interest loans. SGFE will back a few employee loans, so workers can benefit from reduced interest rates instead of going to money lenders. If the first test cases go well, Talamanca hopes to expand the backing to all employees that meet certain conditions (such as seniority or demonstrated reliability).

Back in Kenya, West of EcoZoom will also be deciding next steps. Asked what the most important take-away was from these consultations, she replied that with gender, it’s really important to think about your strategy for engaging men as well as women.

As EcoZoom looks to expand into manufacturing activities, they want to include women throughout the process. However, going into a community with high unemployment and only offering jobs to women may create additional problems for them at home.

West added, “Some organizations have tried to recruit women as sales agents¦ but then found that they were building all this income for women, but when she would bring it home the man would just take it. Because the man didn’t have any education about reinvesting money in the business, this short-term view hurt women entrepreneur’s ability to be successful.

“If you don’t look at it holistically, you don’t create the solution you set out to create. You’re really affecting a family and a household.