29 December 2014 | In 2014, concepts like water stewardship and the water-energy-food nexus gained momentum. Combining that growth with the ramifications of weather extremes like the Rim Fire and the California drought that also happened in 2014 makes the year an eventful one for the water sector to say the least. Studies, initiatives and events aimed at improving global water health marked the past […] 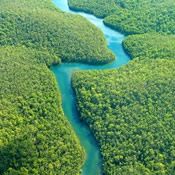 29 December 2014 | In 2014, concepts like water stewardship and the water-energy-food nexus gained momentum. Combining that growth with the ramifications of weather extremes like the Rim Fire and the California drought that also happened in 2014 makes the year an eventful one for the water sector to say the least. Studies, initiatives and events aimed at improving global water health marked the past year.

Despite the known risk, the private sector’s behavior in terms of addressing this risk varies. Much later in the year, the CDP published itsGlobal Water Report 2014 and found innovative companies, like Unilever and H&M are beginning to act on their water risk. According to the analysis, 82% of companies surveyed are setting goals and targets to reduce water use. However there are stillcompanies unwilling to disclose despite pressure from investors. The energy sector has the lowest level of disclosure even though the sector has some of the highest exposure to water risk.

But the private sector is making progress, as evident in CDP’s report. It’s evident in other areas as well. Companies choosing to becomegood water stewards really took shape this year. In April, the Alliance for Water Stewardship (AWS) launched the first International Water Stewardship Standard with notable companies like General Mills and Nestle committing to the sustainable use of freshwater. The Standard defines criteria for good water stewardship through a six-step improvement framework.

Another significant standard that launched in 2014 was the Gold Standard Foundation’s Water Benefit Standard (WBS) . Initiated by environmental consultancy First Climate with the Gold Standard as an initial partner, the WBS uses the results-based finance approach from the carbon world to generate long-term funding for water projects that also deliver socio-economic benefits.

A collaborative effort between the NGO The Nature Conservancy and CH2M Hill, an engineering firm, that intends to grow green infrastructure solutions was initiated this year as well.

“Forests, wetlands, and other water-rich ecosystems are the first line of defense against the rising cost and receding availability of clean, healthy water,” says Michael Jenkins, President and CEO of Forest Trends, a NGO and Ecosystem Marketplace publisher. “Governments and businesses are finding that investment in watersheds is a cost-effective way to close the gap between what communities have and what they need to manage watersheds.”

One concern surrounding valuations is if and how they will affect policy. And how policy will impact conservation is always a big question. For instance, the economic impact assessment report of California’s Rim Fire by environmental nonprofit, Earth Economics led to ecosystem services loss being factored into the state’s application for federal disaster aid.

A groundbreaking piece of legislation passed this year was Peru’s Payments for Ecosystem Services Law. The bill provides a legal framework to support a diverse range of ecosystem services – including greenhouse gas emissions reductions, biodiversity conservation and the preservation of natural beauty.

Another piece of legislation holding relatively big implications for the environment that came out of 2014 was the US Farm Bill. And despite funding cuts to conservation programs and no mention of ecosystem markets, the bill was considered a win for the sector. This was largely due to conservation compliance being tied to federally subsidized crop insurance.

The Farm Bill’s recognition of conservation at least reflects a growing mainstream acceptance of the significance of ecological benefits. Another example that portrays this in a larger way is the growth in water quality trading over the last year. Perhaps the biggest movement was the EPRI’s (Electric Power Research Institute) Ohio River Basin Water Quality Trading Project. It’s the world’s only interstate trading program and, if successful, will reduce nearly 100,000 pounds of nutrient pollution flowing into the Ohio River. The trading system operates using farms that generate credits by keeping pollutants from reaching the waterway. The credits are then sold to power plants, sewage facilities and other utilities that cause nutrients to enter the river.

There is also movement to harmonize trading policy and approaches in the US Northwest with support from federal agencies-the Environmental Protection Agency (EPA) and the Department of Agriculture (USDA). More recently, both agencies recognized Virginia’s water quality trading program aimed at cleaning up the Chesapeake Bay, which was initially established in 2005. Maryland also has a program in the works, although the state has struggled to launch it.

While the appeal of this market-based approach is relatively widespread in the US in terms of testing and development, another mechanism is slowly creeping into the watershed protection space: the revolving loan fund (RLF). During Ecosystem Marketplace’s research for the latest State of Watershed Payments report, authors came across two projects using it and another that does provide some sort of access to loans. The most notable case is in Costa Rica where the non-profit, the Nectandra Institute, established a RLF to restore and protect the San Carlos River. The RLF lets borrowers pay back money over time as benefits from conservation accumulate.

These programs are innovative. A large question, though, is why more projects aren’t using loans to fund watershed protection activities. Because of the multiple social benefits that come from watershed restoration and sustainable land-use, it seems like a space that microfinance institutions would be interested in as well. But as of right now, these institutions aren’t taking much notice. This is likely a subject Ecosystem Marketplace will be looking into over the coming year.

2014 saw increased coverage of the plight of mangrove ecosystems that line Earth’s tropical and subtropical coasts. The critically important salt-adapted trees are disappearing at faster rates than virtually any other ecosystem on the planet. And the loss of mangroves is having tremendous social, ecological and economic impacts. But the greater awareness of mangroves’ importance is spurring action to prevent further loss.

Another issue that received lots of attention in 2014 is the water-energy-food nexus. Interest in this approach to managing water, food and energy in a holistic integrated way is only expected to increase as pressures on each sector increase. Events directed at the private sector on addressing the nexus and initiatives aimed at supporting governments to implement nexus techniques sprang up throughout the year.

The water-energy-food nexus is definitely an area of coverage to follow in 2015.

Closing Out the Year

Further evidence for the nexus’ growing influence can be found at the annual World Water Week in Stockholm. Water and energy was the theme. A side event on natural infrastructure for water and energy was where authors of the State of Watershed Investment 2014 report launched the Executive Summary. They discussed findings which included $12.3 billion in investments from companies and governments that restored and protected 365 million hectares of land-an area larger than India.

Much innovative initiatives, concepts and data came out of 2014. For Ecosystem Marketplace, the year closed out with its Watershed Investments 2014 report published in its entirety.